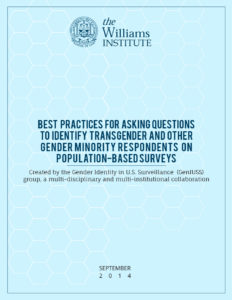 In 2011, the Williams Institute at the UCLA School of Law convened a multi-disciplinary and multi-institutional group of experts to increase population-based data about transgender people and other gender minorities by advancing the development of sex and gender-related measures (i.e., sex assigned at birth, gender identity, gender expression, transgender status) for population-based surveys, with a particular consideration for publicly-funded data collection efforts. This report describes recent research by GenIUSS scholars and other researchers to design and test measures that will identify transgender and other gender non-conforming respondents in surveys of the general population (i.e., large-scale population-based surveys).