Home / Resources / Risk and Resilience During Transgender Identity Development: The Effects of Awareness and Engagement with Other Transgender People on Affect 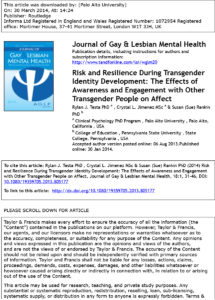 This study evaluates how awareness and engagement with other transgender people influences risk and resilience during early gender identity development. The results indicate that for both MTF and FTM trans individuals, having prior awareness that other trans people exist and having prior engagement with other trans people are both important for psychological wellbeing during early stages of identity development. Specifically, having such awareness and experiences decreased anxiety and suicidality and increased comfort at the time individuals first felt they were trans. By providing psycho-education on the nature of gender and sex and by facilitating social environments that allow trans people to live openly, mental health professionals, educators, and others who interact with youth can have a direct impact on the psychological well-being of trans people.